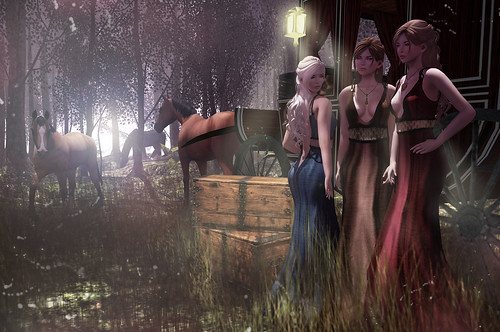 So we’ve entered the first week of the month, when all the events open. Both We ❤ RP and The Mens Dept opened this weekend, and of course Collabor88 will be throwing it's doors open tomorrow.

Today I wanted to show you the new Reign dress from Drift, that came out at We Love RP. Drift is usually a main stream store but now have just started a fantasy line – Drift Fantasy, with this being one of their first items. The dress comes with a HUD that features 10 different colours, as well as 10 different coloured belt options – all for under 300Ls! I don't think you could get a better deal than that anywhere. Make sure you visit We Love RP to check out other great buys.

I also wanna say thanks to Kalli for letting me take this pic on her set! ❤

Just a quicky post today with a bit of a rockabilly style, since I wanted to show you these sexy new heels from Just Design. You can pick them up at The Liason Collaborative’s Boutique, which opened a couple of days ago. I really hadn’t intended to blog the shoes this way, but I’ve been wearing them non stop for days, and found myself dressed up in this outfit for an event in SL today, so I went with it!

The Coco shoes are add ons for the JD MyFeet Tiptoe, they’re a steal at 250Ls (only for this event) and come in a wide range of patent colours. Make sure you grab a pair while they’re on offer!

I only have a couple of new things to show you in this picture, literally just two. Only my hair and socks are new items but honestly I don’t even care because I’m loving this outfit so hard today.

The hair is a long, flowing release from Tableau Vivant that will be available at The Arcade on Saturday. You may have seen some pictures on blogs and Flickr of it already, it comes with adorable soft plushies that can be worn on your head too, but it didn’t quite fit for this picture so I had to leave that at home 😦

My other new thing – the socks with suspenders. These are a mesh item that are going to be released tomorrow from JD at TDR Fusion. I believe they will be able to be worn separately as simple bare sock feet, but are also being made to fit with existing Just Design shoes and boots too, as I’m wearing in the pic.

So much going on over the next few days, I’m really excited and having trouble focusing with so much gorgeous new stuff being previewed, but these 2 items just inspired me to put the rest of the outfit together. Writing my wish list for Arcade today and I can’t waaaaait!

I love these loungey pants from Apple Fall at Collabor88, and the fact that they’re made for men wasn’t gonna deter me from getting them! I know I always say it, but I’m gonna say it again. If you’re buying clothes made for the opposite sex of your avatar please make sure you demo first so that you don’t end up disappointed. Guys pants don’t always work well on girls as the hip shape is different and I usually have to do a little cleaning up in Photoshop to hide that. However, if you’re wearing a top long enough to cover them it doesn’t usually matter.

Some other new stuff from C88 is the sweater I’m wearing by UFO – a cute staple for winter, this gorgeous chunky scarf by Yummy and the pose by Imeka who are making a guest appearance.

Had to wear an oldish Lelutka hair for this style too, since nothing else in my inventory says bed hair like it!

Also, P.S. This title cracks me up.

Just a quickie post to show you these new Christmas outfits from Drift that you can pick up now at the main store, in 5 colours ALL for 99L!

Thanks to Kalli for asking me to jump in the picture and let me snap a pic on her set. ♥

Helloooo! Hope everyone has had a great start to their week, did you spend all your Ls at Shoetopia over the weekend? I know I splurged!

So let me start with my shoes in this outfit. They’re a new pair in a line from Tulip which you can find at Shoetopia and are made to fit the SLink medium feet. I was so excited when Tulip branched out into hair a few months ago and I think I’m even more excited that now they’re creating shoes too. I love that the SLink add ons have given so many other creators a chance to make shoes, the variety out there now is just fantastic. These bootie wedges from Tulip, and the flat roman sandals that she made are two of my fave add ons that you can find at Shoetopia.

I’m wearing another Tulip release that is this halterneck top, there was a version out for Fifty Linden Friday last week, but don’t worry if you didn’t grab it, there’s a whole line of colours available at their main store. The cardigan is from Drift at TDR Fusion and you have a few more days to pick that up before the round changes this coming Friday. It comes in both a plain and striped version which both have 3 different colour textures to choose from via a HUD. The hair is an adorable recent release from D!va that you can pick up at C88.

I don’t do NSFW posts very often, but there’s something about these chain style necklaces that Zibska creates that just makes me wanna ditch half my clothes! This new one is a unisex item that you can find at The Mens Dept, it’s great for creating a sexy look that’s still classy too.

The hat I’m wearing is also a new item at The Mens Dept by Remarkable Oblivion. I’ve seen a ton of pics already with it on Flickr so I’m sure it’s nothing new to you, but it’s another really well made and original piece of mesh from them and it’s pretty damn cool too.

The couch and chandeliers fitted the mood perfectly for this picture, they’re both new items from MudHoney who are a guest at this months round of Collaborate. The couch however, is not your usual couch. It comes with 3 different pieces, chair, corner and ottoman, so you can mix and match them to whichever configuration you like. I used 2 chair pieces and an ottoman one for this pic, to create a chaise style couch.

Finally the feet I’m wearing are a preview of JD’s MyFeet which are going to be released in a couple of days at Shoetopia! This is going to be a great, popular event and I know I’m not the only person who is busting with excitement for it. Friday can’t come soon enough!