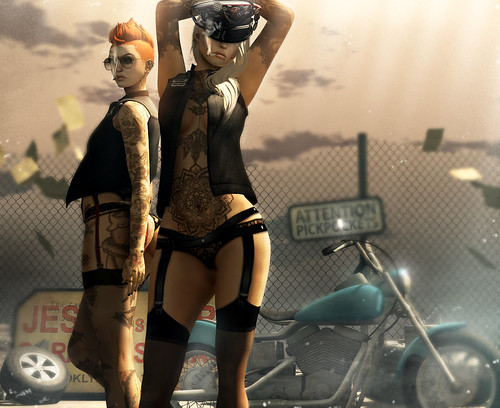 If you’re a fan of Sons of Anarchy, you’ll love the CrimSon Saints set that Kalopsia have put out at The Mens Dept. There’s a whole bunch of decor, including the bike in this picture. On top of that, these leather vests are available to buy too, both male and female! They come with a HUD for the patches so you can change names and titles if you’re you know, that serious about an SL motorbike gang, or just up for some role play!

I’m also wearing a recent tattoo from Space Mermaid which is discounted at The Thrift Shop and a new release hair from Entwined that you can pick up at their main store.

Thank you to the always gorge Oakley Foxtrot for posing with me, you can find her amazing new mohawk from Soonsiki, out at The Mens Dept. 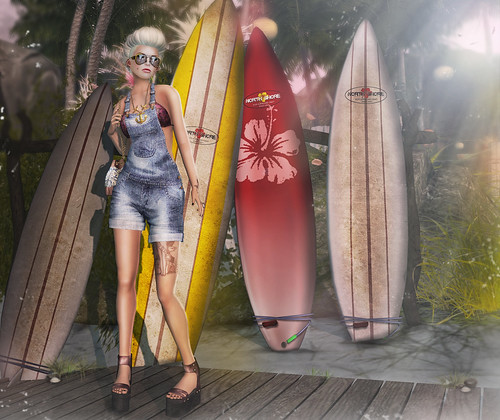 I got a couple more new things to show you guys today, as well as a few recent items that I missed while I was away. I’ve been desperately trying to catch up the past couple of days and you should see the state of my inventory 😦

First of all this new denim overall set from Baiastice, which was was out at FaMESHed yesterday. It comes in lots of different colours, including the classic denim I’m wearing. It also has a HUD which you can use to change the colour of the bra/bikini top underneath, or even make it disappear if you want to wear your own top beneath. It’s a really fun and cute outfit that you could style so many ways.

Recent items are this hair from Milk, out at Kustom9 and the platform sandals from Pure Poison. The necklace is at C88 from LaGyo, it was out for Mays’s round so you still have a couple more days to grab this statement piece, if you didn’t already! My bag is a great little summer accessory from Milk Motion at The Arcade. 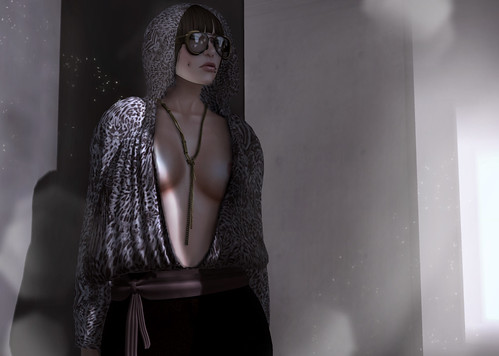 It feels like I’ve been super girly, floral and pink lately, so I decided to change it up a bit.

I’m not gonna lie you to guys, I totally bought this jumpsuit from Elysium because of the plunging and ahem, some what revealing, neckline. I do wish it came with the top seperately though, or that there were similar tops available in SL. Maybe there are and I missed them, but I haven’t really seen anything like this before. I love the hood on it too, it just gives it that extra something to make it unique. The only thing that I will say about it, is that the XS was the smallest size, which I’m wearing in this pic. And yes, I know it’s meant to look baggy/oversized but I still felt like it was a bit too big. So make sure you demo before you buy.

I also added a couple of recent accessories that were released for The Men’s Dept 2nd anniversary round, this necklace from Mandala and the glasses from Remarkable Oblivion. Both of these are brands are among the best in SL for their texture work and modelling, and it’s a real steal to be able to find them in events with discounts, like The Mens Dept.

So ANYWAY, that’s my not so flowery look today, hope you like it!

I don’t do NSFW posts very often, but there’s something about these chain style necklaces that Zibska creates that just makes me wanna ditch half my clothes! This new one is a unisex item that you can find at The Mens Dept, it’s great for creating a sexy look that’s still classy too.

The hat I’m wearing is also a new item at The Mens Dept by Remarkable Oblivion. I’ve seen a ton of pics already with it on Flickr so I’m sure it’s nothing new to you, but it’s another really well made and original piece of mesh from them and it’s pretty damn cool too.

The couch and chandeliers fitted the mood perfectly for this picture, they’re both new items from MudHoney who are a guest at this months round of Collaborate. The couch however, is not your usual couch. It comes with 3 different pieces, chair, corner and ottoman, so you can mix and match them to whichever configuration you like. I used 2 chair pieces and an ottoman one for this pic, to create a chaise style couch.

Finally the feet I’m wearing are a preview of JD’s MyFeet which are going to be released in a couple of days at Shoetopia! This is going to be a great, popular event and I know I’m not the only person who is busting with excitement for it. Friday can’t come soon enough!

So guys, this belt thing from Remarkable Oblivion is out tomorrow for The Mens Dept. I don’t really know what to say about it except that it’s pretty damn cool. It comes with a matching bow tie/collar version too. You should get it!

The sign in the background is one of Seven Emporium’s items for FaMESHed and it’s a great little piece of decor to add to your home.