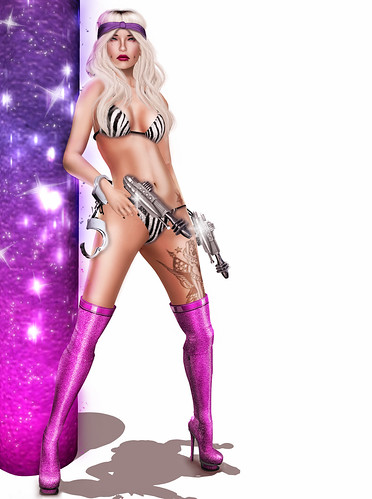 I absolutely cannot look at this picture without laughing or at least cracking a smile. Pretty sure it looks like something that you’d find on the cover of a bad, space themed, X rated movie and I think that’s part of it’s charm for me lol.

I’ve been wanting to blog these Fever boots from JD for a week or so now. They’re out at Rhapsody as party of the disco theme and come in this glitter texture or a plain suede if you want something more subtle. They’re also a 3 in 1 boot, so you can wear them thigh length, knee length and as just a shoe, just by using the HUD, which is a really cool feature. If you get the fatpack you can mix and match the colours on each section too.

So in love with this hair from Little Bones that’s out at Chapter Four today, the band is colour change and had the perfect purple for me to use in this pic. As soon as I saw the zebra print bikini that Drift are putting out on sale at TDR Fusion today, I knew I was gonna add it all together for something fun.

Hope everyone enjoys their weekend, and Americans celebrating today, have a good one!

I only have a couple of new things to show you in this picture, literally just two. Only my hair and socks are new items but honestly I don’t even care because I’m loving this outfit so hard today.

The hair is a long, flowing release from Tableau Vivant that will be available at The Arcade on Saturday. You may have seen some pictures on blogs and Flickr of it already, it comes with adorable soft plushies that can be worn on your head too, but it didn’t quite fit for this picture so I had to leave that at home 😦

My other new thing – the socks with suspenders. These are a mesh item that are going to be released tomorrow from JD at TDR Fusion. I believe they will be able to be worn separately as simple bare sock feet, but are also being made to fit with existing Just Design shoes and boots too, as I’m wearing in the pic.

So much going on over the next few days, I’m really excited and having trouble focusing with so much gorgeous new stuff being previewed, but these 2 items just inspired me to put the rest of the outfit together. Writing my wish list for Arcade today and I can’t waaaaait!

Hiiii all! I know my posts have been few and far between of late, but I’m hoping that this is the week I’m gonna make a come back.

There’s a simple reason I haven’t been around as much and the short version is that about 3 weeks ago I stopped smoking in RL. I know that it’s a good thing in the long run, but for now everything that was routine and normal for me…isn’t. I won’t bore you with a whole lot of detail but yea. It’s hard for me to do things that I would’ve smoked during or after, so my PC time has been a lot less than usual.

Anyway! On to stuff you’re actually here to read! First of all I wanna talk about my new shoes! These are the new Cult Stilettos from Just Design, that are add ons to their tip toe feet. Note that is to the JD MyFeet, they will NOT work with SLink feet. I like that JD have given another option for creators to make shoes around, as well as for people who didn’t necessarily like the shape of the SLink feet, which can sometimes appear very wide. Also with JD selling add ons at TDR Fusion for 70Ls a pair, you can’t really go wrong! The nude version that I’m wearing here can be picked up at TDR Fusion for a couple more days, but there is also a release in the main store of 15 other colours, which are priced at 295Ls each. Also they come with this awesome half sock add on, which can be worn with the shoe or alone. Plus you get the usual sock versions with the MyFeet too! So many options for such a great price. Oh and if you’re worried about tinting the feet, then you don’t need to! Just Design have produced not just a line of presets, but special textures to match the most popular skin brands too. Other than the SLink appliers which are made by the skin creators themselves, you can’t get a more flawless match in presets, than the one JD offers.

Also new are these cool steam punk style wings by Atomic Faery for The Fantasy Collective, which opened last week. They have a stained glass effect which I noticed changed colour depending on the windlight setting/angle I used, which was very cool!

I love this Penelope bed by MudHoney that came out a couple of weeks ago at The Garden event. Black, white and purple are one of my favourite bedroom colour schemes so this Glam version is right up my alley, but there are a ton of other colour options available as well as a kids version! There’s another week or so on this event, don’t forget to check it out if you haven’t already.

So that’s me for today, hopefully I’ll be back around more often!

While I’m on a roll with my blogging I thought I’d share this beautiful new dress with you from a store called Junbug. It’s out tomorrow for the We ❤ RP event and although it's primarily geared towards RP'ers there are plenty of items like this one that can easily be worn in mainstream SL.

This gown comes in several beautiful pale shades, gives you curves to absolutely die for and the corsage on the single strap is a great addition. It's perfect for you to dress up in a fantasy sim, or even worn just as a formal gown, wedding dress or something for your bridesmaids! If you've not heard of Junbug before it's probably because they usually create fantasy and medieval items, but now Juno Mantel the creator is making some original mesh that can work in any environment.

Make sure you stop by We ❤ RP tomorrow when the next round opens to take a look at what other great items are released!

I have a few new things to show you today, first of all this cute, cute short do from Tableau Vivant that you can find at FaMESHed. It’s non rigged mesh so can be adjusted in size and is available with or without bangs, I’m wearing the bangs version here since I liked the extra little wisps that frame my face. The skin I’m wearing is a version of Glam Affairs Lucy that you can find at TDR Fusion for the bargain price of 70Ls! I changed my shape quite a lot to make her more doll lock because I thought that the make up just called for it, so my lips are extra pouty and my nose is much smaller. There are 3 make up options available and it’s a great fun skin that you can buy cheap and dress up in.

The dress I’m wearing is new from Living Imagination at Fashion Week. The bodice part is mesh but the skirt (which is HUGE btw) is flexi. I don’t usually like or wear a lot of flexi these days, but this one is great for pictures, it has a couple of layers, the top layer is actually more sheer and has some sparkle to the texture but I think I didn’t use a great windlight when I took the pic because you couldn’t notice it much, so I decided to add my own and also add the lace bits to make the pic a little more dramatic.

Finally the necklace I’m wearing is a great mesh design from a new store called Amnesia and is available in lots of versions with different coloured gemstones. There are a few other new styles they’ve just released too and it’s well worth checking out.

Hope everyone is having a great week, I know I am!

I’m back from my holiday to RL and I feel like I’ve missed so much! I’ll be catching up for days so I thought I’d start today by showing you some new things from Avenue Fashion Week which kicked off yesterday!

Both of the coats I’m wearing are new releases from NYU for this event, the black one on the left has the white under shirt attached to it, so there’s no need for you to try and fuss with layering mesh, while the poncho trench is a great twist on a classic style.

Both of the hairs I’m wearing were new releases from Truth this weekend, and I have to say I think that my little Coral twins look so utterly adorable in them that I wanna pinch my own pixel cheeks.

Avenue’s Fashion Week is a great event if you like to uncover new designers. There are of course lots of great established brands, but it also features a huge range of less well known creators and a really varied selection of styles. As well as a great shopping opportunity there are lots of fashion shows going on, which can be great fun to attend with your friends. As the name suggests the event is only open for one week, so make sure you check it out!

A real quickie today, another end of summer picture with this pretty, casual dress that Drift is releasing today for the latest round of TDR Fusion. There are 3 colours available, all bright and bold to mark the change of seasons, make sure you visit TDR when it opens later on to pick up yours!