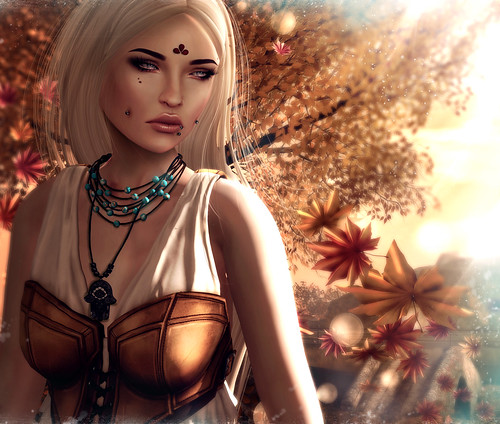 The days are definitely getting shorter and colder now, but it seems like I’m still not done with my fall themed pictures.

Today is C88 eve and if you’re impatient to shop, then let me remind you that We ❤ RP opened it's doors on the 4th to a new round and there's lots of great items that can easily lend themselves to mainstream fashion.

The hair I'm wearing is from the new store Entwined, of which I'm definitely a fan. It's a real long style and it's slickness is perfect. Sometimes with hair that's as sleek as this it can look either too big or too flat, Entwined hits that spot just right.

How darling is this cropped maiden top from Pixicat? There are a bunch of colours to choose from, but I settled on something more neutral. I was actually wearing this bare foot with jeans, and it was a great little look. Really cute item that you can wear in fall and then again in spring and summer. Definitely worth a buy!

I added the Hamsa necklace from LaGyo at FaMESHed as well as one from Gizza that came with their recent hippie style set.

Another new item in this pic are the leaves and bokeh in the background. These are new from Bauhaus Movement and are a great item if you're a little bit Photoshop shy. They come with poses included but you can also rez them and they're just perfect for decor and photos. You can find them at the Xiasumi School Festival.

Hope everyone has a great weekend! 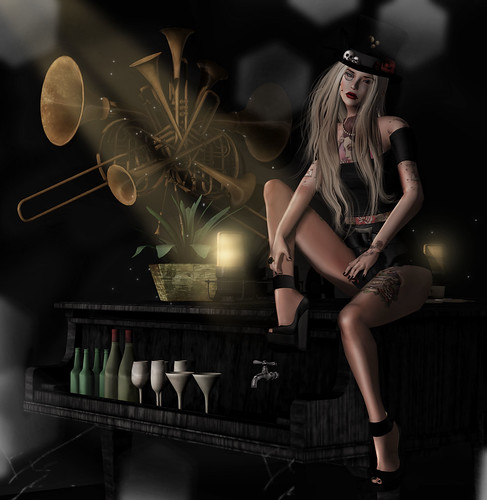 The Fantasy Collective started a new round a few days ago, featuring a New Orleans theme. It’s a great dress up theme and plenty of dark, indulgent items. I’m wearing this hat and hair from Tableau Vivant and lounging around on the set from Kalopsia that you can pick up there. I love the trumpet wall piece and the piano bar is a great unique, decor piece for any room.

I’m also wearing the Oakley shoes from Just Design that were out at Uber for their first round which started on the 31st of July, you have approx 1-2 days to go grab these still if you don’t have them already! I seriously have barely taken them off for the past month and they’ve become a firm favourite for me.

Make sure you visit before it’s too late!

Hi guys! I’ve been away for a few days so I’m breezing back in with this romantical, floaty pic today!

The maxi dress is a gorgeous new release from Drift at TDR Fusion. There are 3 different prints and colours available but I was really feeling the soft blue. Also this new Candy hair from Truth, I cannot tell you how much I love it, but believe me, it’s a lot!

I have a few new accessories on as well, the bracelet and necklace are available at TDR Fusion as well, by Glow Studio, the pretty daisy bag is one of Gizza’s items at The Arcade and the neckerchief is new from Ilo at The Mens Dept with both male and female versions available.

Finally I’m using another pose from Carolina Sautereau’s store, Kirin, this is from her new Nana pose set, make sure you check it out!

How much do I love this new Cindy dress from Gizza, let me count the ways! Seriously, it’s a great little number. The mesh will give you curves to die for and it comes in denim or checked prints. I could probably wear this for the next month quite happily! I won’t though coz yanno, well, yanno.

I took this picture at Editorial Clarity’s Lake House, which he opened for 2 days. This ends tomorrow so make sure you check it out! Editorial is another one of those highly talented decorators in SL, I love following his stream and probably add every picture he takes to my favourites!

Anyway, guess this is a short post today coz I think it’s dinnertime 😀

I know C88 opened today and really it’s an amazing round but I already had this picture planned since Friday when I picked up this sexy little number from Gizza at Limited Bazar, so that’s what I did!

I have no idea when I’m gonna wear this outfit again except for this picture but I absolutely love it. I didn’t take a close up of my backside so you’ll just have to take my word for it that it looks too bootylicious to be true. The hot pants are mesh with the top being a system layer, and the cuffs and shoulder pads are extra attachments so you can wear with or without.

The head embellishment is by Glam Affair for this months FaMESHed which has a few colours to choose from and the skin is only C88 offering for the moment, which is the Glam Affair Margot skin. Usually GA price their skins for C88 at 188Ls, this one is 288 but there are 6 different make ups available instead of the usual 3 and each comes with a clean version which is a great bonus.

Since I made this picture pretty simple and don’t have tons of things that I’m wearing to write about I thought I’d add Berry’s new meme, My 10 SL Firsts too. Quite enjoying seeing these every Monday and then following people’s answers throughout the week! A lot of this happened 6 years or more ago so I might be a bit sketchy on the deets!

1. First SL Friend A girl called Lynn, I can’t remember exactly where we met but I think she was the one who saved me after I’d walked around help island for 3 days shouting in caps, “CAN SOMEONE HELP ME, HOW DO I GET OUT OF HERE!!!” I still have her on my friends list but she hasn’t logged on in years.

2. First SL Kiss Pretty sure this was a guy called Colt who was my neighbour on my mainland 512m plot.

3. First SLex time/partner/place Same guy as above, a few weeks after being in SL, I think it was on a noob nudest beach LOL can’t believe I just admitted that, now I need to go curl up and die somewhere.

4. First SL Partner/Girlfriend/Boyfriend/Wife/Husband Hmm, I’m gonna say a guy called Apollo for this one. We weren’t official “partners” but he was my RP partner and we were basically a couple there and spent anytime outside of RP together as well. I’d say he was the first guy I liked -in that way- This was almost a year after I’d been in SL.

5. First SL Job Dancer at a club, started doing that about a week into SL and only lasted about 3 weeks actually doing it.

6. First SL Creation A wooden beaded bracelet, I don’t have it anymore 😦

7. First Encounter with a Linden I remember seeing them about a lot more in 2006/2007, although I don’t think I ever spoke to one till last year when I IMd her and asked kinda rudely if I could help her since all I saw was someone nooby standing outside my house, then I realised her name was something Linden and apologised profusely since she was just there dealing with a problem on the sim.

8. First Encounter with a SLebrity. I see “known” people around a lot at events and things but generally I’m way too shy and self concious to talk to anyone I’d consider an SLebrity.

9. First SL Sim you you fell in love with. Definitely Botanical, must have been 2007. I basically jumped into RP pretty quickly in SL and didn’t spend much time outside of the badly built Gorean sims, but Botanical really opened my eyes to how beautiful things could be. This was probably when I fell in love with outdoorsy sims.

10. First SL blog post. Ok, this is embarrassing and I cringe when I look back at it but then I look at where I’m at now and how far I’ve come with my picture taking in little over a year. It was on a blog I first started with a friend in February last year. She didn’t stick at it very long so that was when I went ahead and made this one. Anyway, it’s here!

Ok that’s me for Monday so far, I gotta head back over to C88 and buy more things!

See what I did there? With the title?! Bring it on, spring it on! Haha, yea laughing at my own little jokes today, I’m that lame. ANYWAY, I guess I’m pretty early because it is still February but I really cannot wait for spring, I’m so ready!

I got together with my bff4life Harper from Pixel Pantomime coz we’ve been meaning to do another picture together for a while and even though we attempted one last week, I hated everyyyyy picture I took. Some times you just get days like that.

We were inspired by these new hairs from Truth and LeLutka to do kind of hippy style looks, I did get told off for not being Woodstock enough but I liked this new tank from Drift (grabbed it for Lazy Sunday, not sure if it’s in the main store still but one would assume so!) so it was staying, end of story. We hopped on over to Noweeta Grasslands which is a great sim for spring/summery pics and had a fun little shoot.

I’ll add a link to Harper’s post when she’s posted her’s so that you can find her credits there, but here’s mine for now!

By the time I actually post this it will more than likely be just after midnight on Thursday for me, but let’s just pretend it’s still Wednesday, k? K.

I’ve got a few recent releases here that I wanted to share. Most were released over the last couple of weeks and I kept an eye on them till I found the whole outfit that I wanted to put together.

First I’ve got the new military jacket that was released by Chemistry. Lots of colours available and you get a couple of different styles with each. I’m wearing the hip length, collared version but you also get a longer length and both of those without the collar too. I love that Chemistry tends to give these options with their clothes as you feel like you’re getting real value for money. At only 250Ls this is one of the best buys for jackets that I’ve seen lately.

The loose fit denim shorts are a new mesh release from Gizza. They have a lovely little leather belt detail and the shorts are cut so that the pockets hang a little lower than the denim, making them that little bit different from others that are available elsewhere. These will be a great addition to your virtual wardrobe for not only this season, when you can pair them with tights or leggings, but the upcoming warming ones too!

The mesh top I’m wearing under the jacket is the city shirt from Drift. I won’t say that this was easy to layer with the coat, because it wasn’t. I wore the L in the coat and the XS in the top but still in certain poses some of the shirt would poke through on the arms, which was a bit annoying and I confess that I fixed it a bit in photoshop! It’s definitely doable but the fit won’t be perfect if you want to wear that shirt with the jacket – make sure you demo them together before you buy if that’s what you want to do, so that you won’t be disappointed!

I am so in love with this Lavinia hairstyle that Truth released over the weekend. Braids are mah thang yo, and this do is so cute without making me look like I’m trying to impersonate a teen. Really love, love!