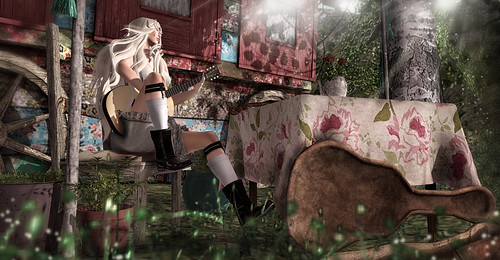 If you’re recovering from Arcade fever, then don’t forget that We ❤ RP opens in a couple of hours (3pm SLT) and you can pick up every item you want, without having to gamble for it! That includes this beautiful, shabby chic style Gypsy camp set from Kalopsia.

There are two different styles available, both come with a caravan which you can't actually go inside but instead is animated with 9 poses, so makes a great decor or pose item. Both also include a table, animated chair and an awning as well as other knick knacks which are different in each set. A complete set is currently marked at 50% off for 250L, which I think is a steal for the amount you get. Or you can buy a pack of both sets for only 400L – even better!

The guitar I'm using in this pic is the one currently available from Balaclava at The Arcade. I loved the busking set and was super happy that I got this on my second go as it was exactly what I wanted. I think these are great picture props and perfect for role play too. I'll definitely take a busking character for a spin now!

Yes I'm wearing the boyfriend socks from Just Design again, I can't get enough of them. But check out my new boots! (close up here on Just Design’s Flickr) These will be available tomorrow (5th March) at The Mens Dept, again by Just Design. They’re unrigged so you can easily resize as needed, also has a removable sock option which I took off so I can wear my beloved boyfriend socks and suspenders.

1 thought on “I Wrote A Song For You”